The essential Ingredient for every Enterprise

Less than five years old, Kubernetes has already become the de facto container management system worldwide. In 2018 Forrester’s cloud predictions declared Kubernetes to be the victor in the “war for container orchestration dominance.” Since then its popularity has only continued to grow and CIOs across every sector now consider it tobe the gold standard for container management. In particular when it comes to supporting DevOps within their business.

Developed as an open source project by Google in 2014, Kubernetes immediately benefitted from its creator’s heritage of employing the world’s best talent and its legacy of experience around providing software services at a large scale.

But it wasn’t just Google’s legacy that led to the rapid growth of the system. Kubernetes brought with it major benefits including its accessibility through major cloud providers like Azure, Amazon Web Services, and Google Cloud Platform. Being hosted and supported by the CloudNative Computing Foundation (CNCF) and The Linux Foundation also proved valuable. Association with bothfoundations helped the system gain credibility through its ability to continually improve through best practices and contributions from members, including SAP, AWS, SUSE, Google and more.
With such widespread support across the industry, Kubernetes eventually sparked the interest of enterprise vendors, which ultimately led it to where it is today – being a central component of innovation within the space.

Flexibility is the key

There is hardly an organisation today that does not deploy a combination of cloud and on-premises data centres. Thus IT needs the ability to easily and securely run and move workloads as well as share data between the various environments. 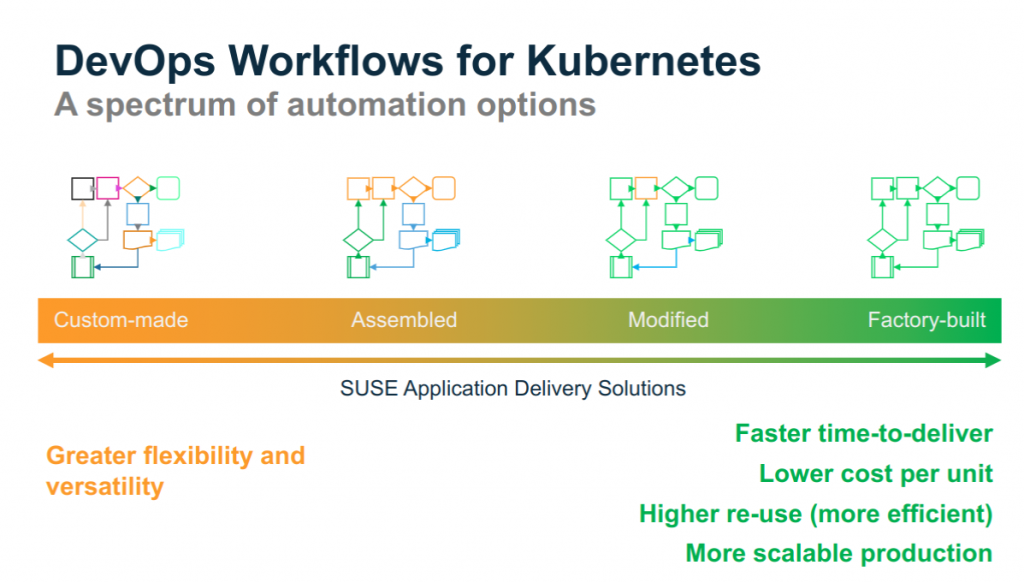 The unrivalled flexibility of Kubernetes makes it ideal for this hybrid environments: it can be implemented across cloud and on-premises, or even run as a service. As the system does not rely on a particular infrastructure, DevOps teams can build applications and then use Kubernetes to deploy them just as easily in the organisation’s data centre as in the public cloud.
From the latest cloud-native micro-services to a legacy application which has been migrated into containers, Kubernetes can handle practically any application. In a
nutshell: if an application works in containers, it will work smoothly on Kubernetes. Designed to support a wide range of workloads, Kubernetes also works well with stateof-the-art development technology, such as serverless architecture.

DevOps innovation at its best