HONG KONG — When Jack Ma and Pony Ma shared a stage at the 2010 IT Leaders Summit in Shenzhen, the two hugely influential Chinese technology tycoons were asked what they thought of the still-nascent field of cloud computing. The men, who are not related, gave starkly different answers.

Jack, who built Alibaba Group Holding, called the cloud a lifesaver for the future of his e-commerce conglomerate. “If we don’t do this, we will die,” he said. Pony, the chief of online entertainment giant Tencent Holdings, conceded that businesses might someday want to run their operations on third-party servers but argued it “would take centuries, if not a thousand years…to materialize.”

“It is simply too early” to explore the opportunity, he said.

Nearly a decade later, Pony has changed his tune and Tencent is dead set on overtaking Alibaba, which has opened up a big lead in the sector. One Tencent executive put it this way: “This is the goal of our company. … Pony made it clear that he is willing to invest 10 years to make it happen.”

Tencent is so determined to catch up that it is snagging cloud customers by pouring millions of dollars into their businesses, with the understanding that they will use its services and help recruit other clients, industry insiders say. Alibaba, however, will not let Tencent move in without a fight. Tencent is building this data center — its biggest yet — in the mountains of China’s Guizhou Province.   © Getty Images

Cloud computing — the practice of using a network of remote servers to store, manage and process data, rather than a local server or PC — has become a booming business. On-demand access to computing power via the cloud allows, say, a streaming company like Netflix to cope with the surge in viewership when a new season of “Stranger Things” goes online. It also makes it possible to offer web-based services like Dropbox and Google Docs.

Worldwide spending on public cloud services and infrastructure is forecast to reach $210 billion this year, up from less than $170 billion in 2018, according to market analysis firm IDC.

China is the world’s second-largest public cloud market after the U.S., with spending estimated to reach $10.5 billion this year. Since Beijing’s security restrictions make it difficult for Western tech companies like Amazon and Microsoft to handle the data, analysts say this multibillion-dollar battlefield is left largely to domestic competitors.

Alibaba is the undisputed leader, but IDC data shows Tencent is gaining ground. In the segment known as “infrastructure as a service” — one of the most popular forms of cloud services in China — Tencent achieved a market share of 11.5% last year. That was far behind the 43% share of Alibaba Cloud, known as AliCloud, but it was an improvement from 7.4% in 2016.

The gap between the two companies is expected to narrow further, said Elinor Leung, head of telecom and internet research at brokerage CLSA in Hong Kong. Although Leung thinks Alibaba is likely to stay ahead thanks in part to its first-mover advantage, she said Tencent has strengthened its technical know-how and has an edge in sectors such as gaming and video streaming. 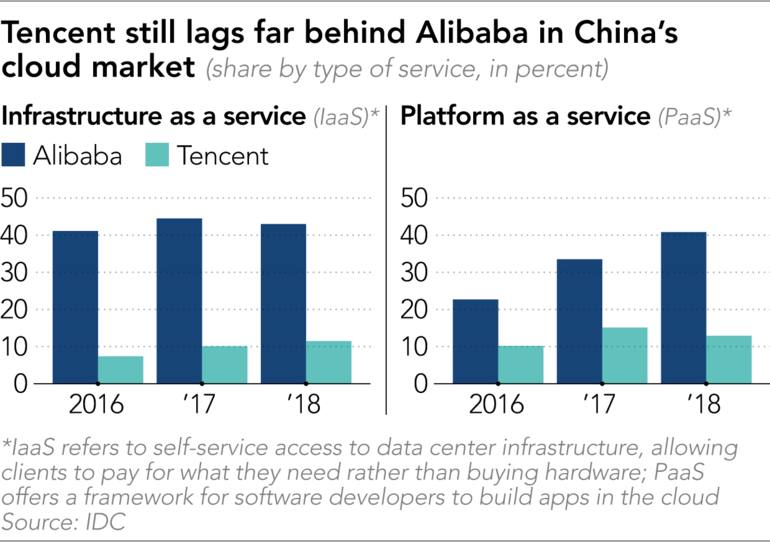 “I think Tencent can be a competitor [for Alibaba] in the market,” Leung said.

Tencent and Alibaba, both of which have market capitalizations approaching half a trillion dollars, are no strangers to competition. The two have clashed over everything from internet advertising to food. Alibaba controls 36% of China’s online ad sales versus Tencent’s 15%, according to investment bank Bernstein. Tencent beat Alibaba in meal deliveries, with 61% of Chinese customers placing orders through Tencent-backed Meituan Dianping compared with 37% who use Alibaba’s Ele.me.

But the stakes are much higher in the cloud. Industry watchers say these services will not only yield billions of dollars in revenue but also shape China’s tech landscape, as tomorrow’s cities, industries and all sorts of technology will be cloud-reliant.

“Cloud computing is the future,” said Ethan Qi, an analyst with global consultancy Counterpoint Research in Beijing. As businesses increasingly digitalize their operations with the help of cloud providers, “I believe cloud computing will become the key driving force behind the future growth of Tencent and Alibaba,” he said.

For now, the rivals are both losing money in their cloud operations. Alibaba’s cloud business, despite rapid growth in revenue, lost more than 1 billion yuan ($145 million) in the first quarter of this year alone. Tencent did not disclose its losses.

The cloud, however, holds the key for the two groups to branch out from their consumer-focused businesses and cater to industrial clients — a crucial transition as growth starts to slow amid China’s economic downturn.

While sales from cloud services make up only a single-digit share of Alibaba’s revenue, CEO Daniel Zhang — Chairman Jack Ma’s successor-in-waiting — has said the operations could grow to even outstrip e-commerce. “I think the cloud will be … the main business of Alibaba in the future,” Zhang was quoted by CNBC as saying last year.

Tencent, meanwhile, named cloud computing as one of its core businesses alongside gaming and social networking during a round of restructuring in September. The entertainment heavyweight has pledged to become a “digital assistant to all industries.”

Qi suggested that strong cloud operations would give the companies an edge in other fields. “Alibaba and Tencent are major players in big data and artificial intelligence,” he said. “Cloud services will give them a chance to showcase their technologies.”

An easy way to understand this is to think of the cloud as a different kind of public infrastructure — a highway. Cloud-based services, then, are stores along the road. Customers who are already on Tencent’s highway will be more likely to shop at its stores, rather than taking a detour to do business with Alibaba.

As a latecomer, Tencent has gained its foothold by focusing on sectors it knows well. In gaming — where it is the country’s No. 1 publisher — Tencent says it has convinced 75% of fellow gaming companies to use its cloud services.

The operator of the WeChat instant messaging app, which has 1.1 billion active users, has also capitalized on its strength in social networking. At least 160,000 shops, restaurants and other businesses that use WeChat to interact with their customers have also used Tencent’s cloud offerings.

But to knock AliCloud from its perch, Tencent knows it has to do better than that.

Shanghai Anchnet Network Technology, a major developer of cloud-based software, is one company that has switched from AliCloud to Tencent Cloud. The trigger? “Tencent invested 100 million yuan in our business,” said an Anchnet executive who spoke on condition of anonymity. Although Tencent’s cloud technology did not outperform Alibaba’s, the executive said, “my boss was keen to get the investment.” So Anchnet turned its back on AliCloud, bringing with it more than 2,000 companies that use its software.

The deal also gave Anchnet motivation to promote Tencent’s cloud service: It is expected to help bring in deals worth 100 million yuan a year or pay a penalty. “Tencent has recruited many business partners like us,” the executive said. “That’s why it has expanded its market share so quickly.”

Analysts say that although Alibaba is far ahead, much of the Chinese market is still up for grabs.

When it comes to dealing with manufacturers and other clients outside their respective comfort zones — retail for Alibaba, entertainment for Tencent — the rivals stand at the “same starting point,” said Rachel Liu, a researcher with IDC China. “Their success in those sectors will depend on how quickly they can build an ecosystem and how attractive their ecosystem is.”

In May, Tencent held its first Global Digital Ecosystem Summit in the southwestern Chinese city of Kunming. There, an engineer cheerfully showed visitors an array of smart locks, indoor humidity monitors and other internet-connected devices. All were built on Tencent’s cloud platform, for which the developers did not pay a single yuan.

“We want to provide solutions for all the ‘internet of things’ device makers,” the engineer explained. The logic, according to him, is that anyone can take advantage of Tencent’s free platform to develop their own software, but companies that become addicted to the convenience will demand more. That, in turn, will give Tencent a chance to charge for the service.

Plus, once a large number of device makers are on the platform, software developers serving the IoT industry would follow suit, and Tencent would be able to take a cut from every software sale. 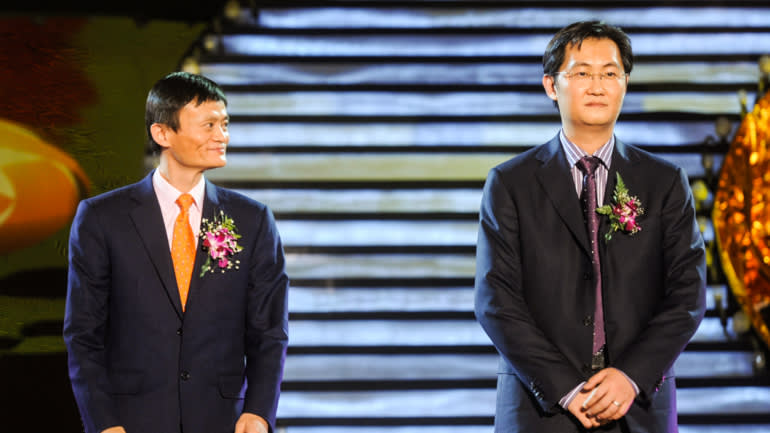 Alibaba’s Jack Ma, left, and Tencent’s Pony Ma in 2009: The two tech tycoons had very different views of cloud computing back then.   © AP

To make all of that possible, the engineer said Tencent is investing in rapidly expanding his team, making at least 20 to 30 new hires in the first five months of this year.

But despite Tencent’s efforts, another industry analyst said Alibaba is still better positioned to win over Chinese IoT device makers, at least for now. The analyst, who asked to not be named due to concerns about upsetting Tencent, told Nikkei that Alibaba has developed “strong expertise” in cloud computing over the years and is geared up for the battle ahead.

Nevertheless, Dowson Tong, a senior executive vice president who oversees Tencent’s cloud business, sounded confident. While he acknowledged that the cloud business had been spilling red ink, he told reporters at the summit in May that Tencent was committed to investing more.

“We see a dramatic demand for cloud and infrastructure,” Tong said. “We have increased our investment in the cloud business and all other aspects related to this area … and we will continue to do that.”